Current Issue Volume No: 3 Issue No: 3

Helicoverpaarmigera is one of the most destructive pests of field crops worldwide. The Study was designed to investigate through laboratory screening the insecticidal activity of Ricinus communis, Cassia occidentalis and Bacillus thuringiensis var. Kurstaki (Btk) and their combinations against 2nd larval instar of H. armigera. Five concentrations (4%, 6%, 8%, 10% and 12%) of each plant extract and (0.62, 1.25, 2.5, 5, and 10 mg/ml) of Bt were used in this experiment. Mortality (%) was recorded after 24,48,72 and 96 hrs post treatment. The results showed that R. communis, C. occidentalis and Btkhave insecticidal activity against 2nd instar larvae of H. armigera. The highest concentration (12%) caused 80% and 70% larval mortality after 96 hrs for R. communis and C. occidental respectively.

The statistical analysis revealed that there is a significant differences between all treatments and control. Additionally, all combinations (plant/plant or plant/Bt) increased the mortality %. The results also clearly demonstrate that the R. communis are significantly more toxic than C. occidental where the LC50 values were 6.4 % for R. communis and 8.1% for C. occidental. On the other hand LC50 value for Bt was 0.41 mg/ml.

Helicoverpaarmigera Hübner (Lepidoptera: Noctuidae) is one of the most destructive pests of field crops worldwide. It is a highly polyphagous multivoltine, and economically important pest of cotton and other crops and has developed resistance against most of the modern classes of synthetic insecticides1. In semiarid tropics the annual losses caused by this pest estimated by US$ 2 billion, even though US$ 500 million worth pesticides are applied to control this pest 2.

African bollworm has been reported on 35 crops and 25 wild host plants in eastern and southern Africa. In Sudan, it attack a wide range of host plants such as cotton, sunflower, french beans, dry beans, okra, peas, legumes, maize, sorghum, tobacco and tomato 3. Also it was reported as the main insect pest on chickpea. Economics losses ascribed to direct yield reduction and cost of chemical applications to control this pest are considerable 4.

The problem of this pest is magnified due to its direct attack on fruiting structures, voracious feeding habits, high mobility, fecundity and multivoltine overlapping generations. Besides, it has developed resistance to broad spectrum of insecticides due to exposure of successive generations while moving from one crop to another, which made this pest highly resistant to many insecticides such as cyclodiene, pyrethroids, organophosphates, carbamates etc 5.

Some insecticides such as carbaryl, karate, cypermethrin, dimethoate and monocrotophos have been used to control this pest 6, cyprofen 220 ul 3, and kung fu 5% ec and karate zeon 10% were also used in sudan. 7. however because of the health and environmental risks of synthetic insecticides, recently the pesticidal effects of botanical extracts have been studied by many researchers worldwide 8, 9, 10.

Castor bean (Ricinus communis) has traditionally been used in agriculture. In fact it is a unique species of the genus ricinus in the family euphorbiaceae as its seeds contain 2.8–3% toxic substances such as ricin, a potent inhibitor of protein synthesis, and agglutinin-111.

The experiments were conducted in the Research Laboratory, College of Agricultural Studies (Shambat), Sudan University of Science and Technology (SUST), during February - March, 2021. The average temperature is between 25-32°C.

Larval instars of H. armigerawere collected from unsprayed tomato plants grown in Gamouaia Scheme Southern Khartoum and brought to the laboratory for mass rearing. Early instar were reared in groups of 100 larvae in plastic cages 19 cm in diameter covered with muslin cloth and fed on okra fruits, whereas 4th instars were reared separately in plastic cubs 5 cm in diameter and 7 cm in height to avoid cannibalism and the bottom of each cubs was filled with sand for pupations. Upon emergence the adults were transferred to plastic cages 31x20x19 cm covered with muslin cloth and fed on 10% sugar solution 19, cotton stripes were hung on the margins of the cages for eggs laying and were replaced daily with new stripes while newly hatching larvae were transferred to the larval rearing cages. The rearing process continued until a sufficient number of homogenous populations of larvae was collected for the experiments.

Seeds of R. communis and C. occidentalis were collected from river bank, Omdurman area and brought to the laboratory for shade-drying. After complete dryness the plant samples were crushed by an electronic blender to obtain the powder. 120g of prepared seeds powder were extracted with absolute ethanol using Soxhlet apparatus for six hours, and rotary evaporator was used to remove the solvent20.

Second larval instar was used in this study. Fruits dipping method 21 was followed, small pieces of fresh okra fruits were dipped for 30 seconds in different concentrations and left to dry under room conditions for 10 minutes. Ten pre starved larvae (one hour) were used for each treatment and each treatment was replicated three times. Three replicates were also used as a control set. All treated larvae were kept in Petri-dishes 9 cm in diameter at temperature of 25±1 °c. Treated larvae were provided with fresh okra pieces till the end of experiment. The mortality % was recorded 24, 48, 72 and 96 hrs after application.

To evaluate the joint action of tested plant extracts and Bt the method of Mansour et al. 22 was adopted with some modifications. In which paired mixtures of plant extracts were prepared at concentration levels of their respective LC25 values at 1:1 ratio. Each mixture was tested in three replicates along with controls. Mortality percentages were determined after 24to 48 hrs and the combined action of the different mixtures was expressed as Co-toxicity factor. The following formula were used to determine potentiation, antagonism and additive effect:

The co-toxicity factor differentiates the results into three categories. A positive factor of ≥ 20 indicates potentiation, a negative factor of ≤ -20 indicates antagonism, and the intermediate values of >-20 to < 20 indicates an additive effect 22. The LC25 values of each extract and Bt were tested again against 2nd larval instar in order to determine the accurate expected mortality. The expected mortality of the combined pair is the sum of the mortalities of single compound at recorded LC25 and the observed mortality is the recorded mortality obtained after 24 – 48 hrs of exposure to the mixture.

The results shown in (Figure 1) proved that all Bt concentrations generated a significantly (p < .001) higher mortality percentage than the control throughout the experimental period. It should be noted that the percent mortality increases with the increase of both concentration and exposure period. LC50 value of Bt was 0.41 mg/ml as shown in (Table 2). 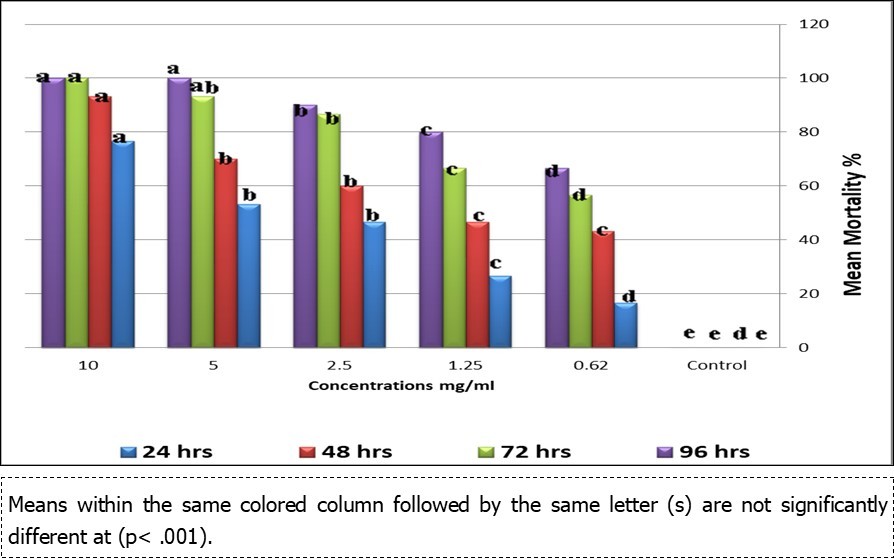 Paired mixtures of plant extracts and Bt were tested against 2nd larval instar of H. armigera as described in material and method section. The results shown in (Table 3) illustrated that the binary mixture of R. communis and C. occidental have an additive effect after 24 hrs whereas, after 48 hrs of application a potentiation effect (CTF = +23.5) was recorded. Regarding the binary mixture of Bt and plant extracts the results revealed that the R. communis and Bt mixture induced a potentiation effect (CTF = +26.7), meanwhile, C. occidental and Bt mixture induced a an additive effect (CTF = +14.9).

Botanicals have long been proposed as smart alternatives to synthetic insecticides for pest management because they are safe to the environment and human health. More than thousands species of plants have been reported to have chemicals in its various parts which have insecticidal properties. However, a few of them were used for insect control on a commercial scale 23. The study findings clearly proved the efficacy of R. communis against 2nd larval instar o H. armigera. In fact its highest concentration (12%) gave 80% mortality of tested larvae after 96 hrs of application. Kodjo et al. 24 found that 5% oil emulsion of R. communis caused 89.58% mortality of the diamondback moth Plutellaxylostella in ingestion toxicity test. Parajapati et al. 25 also recorded that the seed extracts of R. communis showed better insecticidal activity than the leaf extracts against S. Frugiper due to the active compounds such as castor oil and ricinine.

The mortality percent recorded after 48 hours of exposure by the lowest and highest concentrations (4% and 12%) of seeds ethanolic extract of C. occidentalis does not changed even after 72 hrs post treatment. This may indicate to an acute action of this plant extract. Similar results were recorded by Elnour 20 who found that the percent mortality caused by various concentrations of seeds ethanolic extract of C. occidentalis against African melon ladybird Henosepilachnaelaterii after 24 hrs dose not changed after 48 hrs of exposure. Also Vashishta et al. 26 found that C. occidentalis generate an acute toxic effects in vertebrates and its toxins do not accumulate in body tissues.

The results also revealed that all Bt concentrations caused a significantly higher mortality percentage (p<.001) than control throughout the experimental period. The estimated LC50 value of Bt was 0.41 mg/ml in this study. Plata-Rueda et al. 27 found that LC50 of Btkon nettle caterpillar Euprosternaelaeasa was 1.25 mg/ ml.

Study findings illustrated that the binary mixture of R. communis and C. occidental have an additive effect after 24 hrs, whereas after 48 hrs of application a potentiation effect (CTF = +23.5) was recorded. Regarding the binary mixture of Bt and plant extracts the results revealed that the R. communis and Bt mixture induced a potentiation effect (CTF = +26.7), meanwhile, C. occidental and Bt mixture generated a an additive effect.

Reddy and Chowdary 29 noted that the compatibility of a plant extract for combination with microbial insecticides depends on qualitative and quantitative variations of secondary metabolites, which may affect the microbes. Many plants extract such as Annona squamosa L., Datura stramonium L., Eucalyptus globules Labile, Ipomea carnea Jacq., Lantana camara L., Nicotiana tabacum L., and Pongamia pinnata L. Showed a synergistic effect when mixed with Btk.

The obtained results clearly proved that the R. communis, C. occidentalis and Bt have insecticidal activity against 2nd instar larvae of H. armigera.

Its observed form the study finding that the efficacy of R. communis and C. occidental can be enhanced by mixing them together or can be used in a combination of Bt which may reduce the amount required for application to control this pest as well as to reduce the environmental hazards.

The authors are pleased to thank Mr. Elsadig Eltayep Eltom Elshukry, Agricultural Research Corporation, for his assistance in statistical analysis of experiments.