Current Issue Volume No: 1 Issue No: 2

Bacteria are micro-organisms or unicellular living beings without a nucleus. Human body harbors several microorganisms, which can be commensal or pathogenic. As soon as they become pathogenic, they can be responsible for many infectious diseases 1 According to the World Health Organization (WHO) bacterial infectious diseases are the 3rd cause of death in developing countries malaria and malnutrition 2. Among the bacteria we cite Staphylococci, which are bacteria responsible for numerous infectious foci which can disseminate and cause septicemia, endocarditis (infection of the endocardium), osteomyelitis (infection of the bone tissue) 3, 4. The species Staphylococcus aureus is the most isolated species and in recent decades has been one of the main causes of hospital or clinical and community infections 5.

Traditional bacteriological methods, namely the study of morphological, cultural and biochemical characters, remain the reference for the identification of the Staphylococcus genus as for all other bacteria. On the other hand, molecular biology techniques are more advantageous for the detection of different bacteria 6,7; and have been able to find their place in routine in a large number of medical analysis laboratories. There is a common molecular biology method for the identification of bacterial strains consisting of bioinformatics analyzes of the nucleotide sequences of the gene encoding 16S ribosomal RNA (16S rRNA), an essential component of the 30S ribosomal complex in prokaryotes, due to conservation of this gene between different species of bacteria. Staphylococcus strain’s identification being an important factor in the management of hospitalized and non-hospitalized infected patients and also a means of overcoming therapeutic failures, this work is therefore part of the aim of confirming by molecular methods the identification of bacteria of the genus Staphylococcus produced by conventional bacteriological methods.

Site and Collection of Strains

Staphylococci strains collected at the biomedical analysis laboratory of the Center Hospital and University Center of Brazzaville (CHU-B) using various biological fluids from hospitalized patients (hospital strains) and non-hospitalized patients (community strains) were used.Strains were isolated during the period of April 2020 to July 2020.

The isolation of the strains was carried out on nutrient agar associated with a selective Chapman agar.

The identification of the strains was made on the basis of the morphological characters and the production of a catalase and a staphylocoagulase by the bacterial strain 8.

Ten strains of Staphylococci identified by conventional bacteriological methods were the subject of a molecular analysis on the analysis of the gene coding for the 16S rRNA.

Amplification of the 16S rRNA Gene

The PCR products were demonstrated by electrophoresis on a 1% agarose gel at 100 volts for 45 minutes with TBE buffer. The staining was carried out with a 1 μg/ml solution of ethidium bromide. The gel was visualized under a UV lamp, by fluorescence. The size of the sought gene was around 1500-1300 bp.

Sequencing of PCR Products and Assembly of Sequences

The PCR products resulting from the amplification of the gene encoding the 16S rRNA of the ten strains were purified using the NucleoFast 96 PCR plate (Macherey-Nagel EURL, France) and sequenced by the company Masrogen using the BigDye terminator chemistry on an ABI sequencer. 3730 (Applied Biosystems, Foster City, CA, USA). Baser DNA sequence assembler was used for sequence assembly.

The analysis of the sequences A2, A3, A4, A5, A6, A10 respectively sequences of the strains S2, S3, S4, S5, S6, S10, S. aureus) and A1, A7, A8 A10 of the S1, S7, S8, S10, SCN) was performed using the Local Baseline Alignment Search Tool (BLAST) available at the National Database, Center for Biotechnology Information (http://www. ncbi.nlm.nih.gov). Translation of nucleotide sequences into protein sequences was performed on SMS-ORF Finder. The alignment of the nucleotide sequences was done on ClustalW. Molecular phylogenetic and evolutionary analyzes were performed using MEGA version 7 12.

Isolation and Identification of Strains

Figure 1 represents the percentage of strains of community and clinical Staphylococci isolated and identified. 30 strains of Staphylococci were isolated, including 8 (26.66%) community strains, 22 (73.33%) strains from samples taken from the services in the Hospital and University Center of Brazzaville. 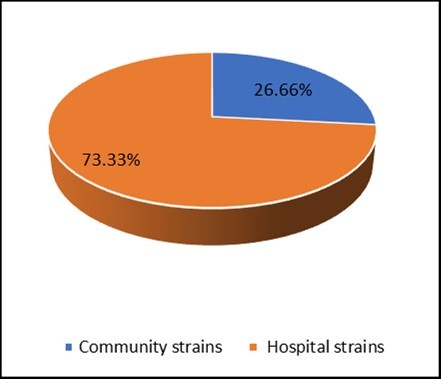 All strains isolated were Gram positive and catalase positive bacteria. The fresh state showed that all the stumps were cocci in immobile clusters. 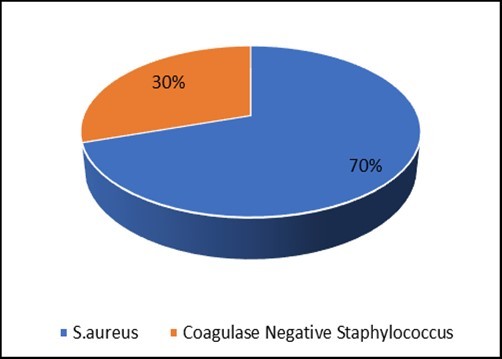 Ten strains of clinical Staphylococci, including 6 S. aureus and 4 with Negative Coagulase by classical bacteriological methods, were the subject of a molecular analysis for confirmation on the analysis of the gene coding for 16S rRNA.

Figure 3 shows the DNA fragments (gene encoding RNA16S) obtained by 1% agarose gel electrophoresis of the 10 strains. The bands are about 1500 Pb in size.

PCR fragments were sequenced and assembled. Table 1 describes the analyzes relating to the similarity of the 16s rRNA sequences between our query sequences and the sequences present in the Gene Bank database, using the bioinformatics algorithm BLASTn. The analysis of this table shows, according to the percentage of similarity, a diversity of species of the identified strains.

Figure 4. Part of the multiple alignment of the gene sequences encoding the 16S rRNA of the identified strains and the homologs sequences from the databases. 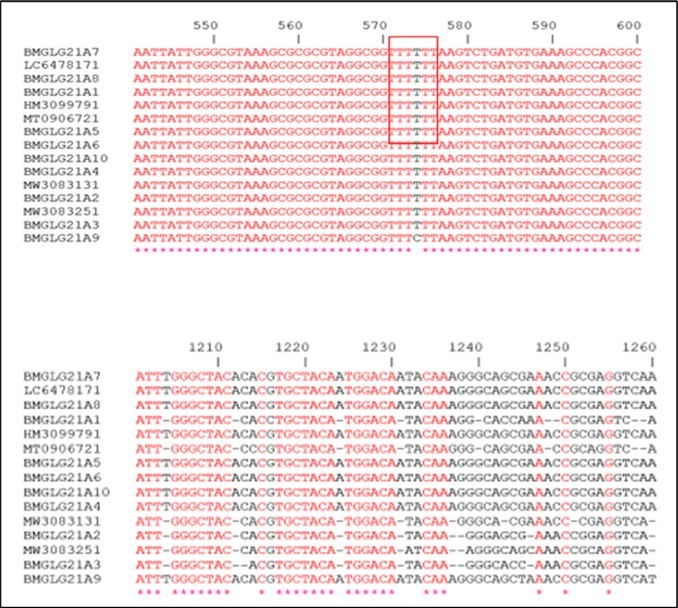 Figure 5 shows the phylogenetic tree of the identified strains, the species diversity is clearly visible. This tree shows distances of 0.2% (0.002) between strains and that the strains have a common ancestor.

Figure 5. Phylogenetics of strains identified by the 16S rRNA gene and their homologs from databases

The evolutionary history was deduced using the UPGMA method 13. The optimal tree with sum of branch length = 0.05128113 is displayed. The tree is drawn to scale, with branch lengths in the same units as the evolutionary distances used to infer the phylogenetic tree. Evolutionary distances were calculated using the p-distance method 14 and are expressed as the number of baseline differences per site. The analysis focused on 15 nucleotide sequences. Codon positions included were 1st+2nd+3rd+Noncoding. All positions with gaps and missing data have been eliminated. There were a total of 1156 positions in the final dataset. Evolutionary analyzes have been carried out in MEGA7 12.

Although classical bacteriological methods remain the reference for bacterial identification, we used the molecular method based on the analysis of the gene coding for 16S rRNA for the confirmation of the isolated staphylococcus strains and the different related species identified in this work. Analysis of the results by conventional bacteriological methods show a high percentage of staphylococcus strains from hospital settings (clinical strains) with a prevalence of 67.50%, these results are close to those of 15 and 16. All strains of Staphylococcus were identified as Gram positive and catalase positive bacteria. The results of the fresh state showed Cocci in immobile clusters at the level of all the strains.

1% agarose gel electrophoresis of the strains' 16S rRNA gene PCR products showed a length of approximately 1500 bp. This size (1500Pb) has been endorsed by several studies which have shown the importance of the 16S rRNA gene in the classification and identification of the molecular genus and species of prokaryotes identical to the results obtained by, 17, 18.19. This size indicates that the strains belong to the large group of prokaryotes and certainly to the genus Staphylococcus. Analysis by BLASTn of the sequences of the PCR products, A2, A3, A4, A5, A6, A10 and A7, A8, A9, A10 originating respectively from the strains S2, S3, S4, S5, S6, S10 (S.aureu) s and S7,S8,S9,S6 (SCN) gave E values ​​of 0.0 for all sequences, for each isolate the equivalent based on % similarity of 94.5% with A1 Staphylococcus.sp (OM281812.1 ), A2 94 % S.aureus (MW308320.1), A3 94 % S.aureus (MW308321.1), A4 91.2 % S.aureus (OP067888.1), A5 91.2 % S .aureus (MK809243.1), A6 92 % S. aureus (MK809241.1), A7 93.4 % Staphylococcus haemolyticus, A8 92.4% Staphylococcus haemolyticus (MK934564.1 ,A9 93.5% Bacterium clone uncultivated nbw618g09c1 (GQ110719.1), A10 94.5% S.aureus (AF815929.1.) . The E value as well as the percentage of sequence similarity of the rRNA16S gene of the identified strains show that the results obtained are significant, and make it possible to infer the belonging of the strains, S2, S3, S4, S5, S6, S10 to the species S. aureus, confirming the identification pa r the coagulase test; from S7 and S8 to the Staphylococcus haemolyticus species and the S9 strain to a bacterial clone. The results are different from those presented by 20 during the 15th National Day of Infectiology on the limits and indications of universal PCR of 16S rDNA, indicating the identification of isolates of S. aureus and S. epidermidis at a similarity percentage ˃ 98%. Blast analysis also allowed the identification of two Staphylococcus haemolyticus species and of a bacterial clone of the 4 SCN strains identified by the coagulase test; these results show the limits of traditional bacteriological methods in the complete identification of bacteria.

The analysis of the multiple alignment of the sequences of the RNA16S gene corresponding to all the strains of staphylococci identified and the homologs in the database using the CLUSTAL W algorithm allowed the highlighting of the mutations (losses of nucleotides), These results could explain the low rate of the percentage of similarity observed between the identified sequences and the homologs in Gen Bank. The multiple alignment of the sequences also made it possible to highlight highly conserved regions between the sequences, reflecting the belonging of the identified strains to the same family, to the same genus. These results also show that the strains have undergone evolutionary changes over time, evolutionary changes that are confirmed by the established Phylogenetic tree.

This study made it possible to confirm the identification of Staphylococcus strains made by microbiological methods based on morphological and biochemical characters (coagulase test) by molecular biology techniques, more precisely by the amplification of the 16S rRNA gene from DNA extracts from ten strains. The amplification of the 16S RNA gene is a universal, precise and objective method, whose inter-operator variability is limited compared to conventional techniques, it has enabled us to broaden our knowledge of the bacterial world, more precisely of the genus staphylococcus both at the level of the species and of the genus by highlighting the existing phylogenetic interferences.