Current Issue Volume No: 5 Issue No: 1

According to World Health Organization (WHO), adolescents are people between 10 and 19 years of age. Today there are 1.2 billion adolescents worldwide with nearly 90% of them living in developing countries. Adolescence is characterized by significant physiological, psychological and social changes that put adolescents for high risk sexual and reproductive health (SRH) problems. This has partially been because adolescents were considered to be relatively healthy, without a heavy “burden of disease” 1, 2.

Adolescents are not quite capable of understanding complex concepts, or the relationship between behaviors and consequences, or the extent of control they have or can have over health decisions making including that related to sexual and reproductive behavior. This makes them vulnerable to sexual exploitation and high-risk sexual behaviors and reproductive health problems 2, 3.

Previous studies demonstrated that the age at marriage for adolescents living in rural areas is quite low compared to their counterpart in urban area. For girls these situations predispose them to teenage pregnancy that may have more immediate effect on their life that any other problem. The changing moral & social values and shift in the standard of societal behavior from conservatism to liberal interaction between both sexes is attributed largely to exposure to the media especially television and movies. Adolescents find themselves sandwiched between a glamorous western influence and a stern conservatism at home, which strictly forbids discussion on sex. This dichotomy aggravates the confusion among adolescents have led to increase in premarital sexual activity, pregnancy among unmarried girls apart from the increasing incidence of abortion & STDs.

Early and unprotected sexual activity and misconceptions about HIV/AIDs are prevalent among rural adolescents4. It was previously reported that adolescent knowledge about sexual reproductive health affects the reproductive health services utilization5. The World Health Organization (WHO) estimates that in Africa, 60% of all new HIV-infection occur in adolescents who are 15-19 years old. In developing countries, there are about 12.8 million births by adolescents aged between 15-19 years, and a large proportion of these pregnancies are unplanned 6.

One of the major causes of the high prevalence of STIs among the adolescent is poor utilization of sexual reproductive health services as well as poor knowledge. In developing countries, 20,000 girls of between 15 and 19 give birth every day, One-third these girls are married before 18 years old. Most of them are poor, less educated and living in rural areas 2.

Data from Rwanda’s Ministry of Health indicate that adolescents and young adults comprise the majority of Rwanda’s population. For instance, young adolescents (10-14 years) make up about 17.1%, old adolescents (15-19 years) about 12.4% and young adults comprise 10.7% of the total population while another third of the population (32.1%) is under 10 years. The report showed that adolescents remain neglected group, in the country’s health care model this group is neglected because they are considered comparatively healthy with a low disease burden. Yet the choices adolescent make today affect their health and the health of their families in future, especially the choices related to family planning and STDs. It was reported that Rwandan adolescent lack the ability to negotiate safer sex or to seek the health of family planning services 8.

Due to the lack of knowledge and poor utilization of reproductive health services the number of unwanted pregnancies and STDs has been increasing in Rwanda. The number of teenage pregnancies in various parts of the country shows how government and parents need to put in more efforts to contain the issue which leads many young girls to drop out of school. For example, in 2016 some 17,000 young girls most of them under 18 years got pregnancy 9.

Teenage pregnancy has been described as a major challenge to Rwanda whose numbers are increasing, especially in the rural areas. Poor rural girls with limited or no access to sexual reproductive health services are at higher risk of becoming pregnant or falling victims to sexually transmitted diseases. On other hand, a report from UNICEF showed that young people in Rwanda remain at risk of contracting HIV virus , this is because a large number of young people in Rwanda, are unaware of the risks associated with HIV and particularly how to prevent against HIV. The same report showed that only 49% of males and 43% of female understand how to use condoms 10.

A community cross-sectional study with quantitative approach was carried out in Rwamagana district. A cross-sectional research design was chosen because this help researcher to collect quick information and make analysis that respondent to study objectives.

Based on the target population, a sample size was estimated by using Yamanee formula.

Where n is desired sample, N target population, e is the marginal error (5%)

Therefore, a sample size of this study was 392 adolescents aged 15-19 years.

Due to the nature of the study, the study was conducted in rural sectors as the aim of the study is to assess the reproductive health knowledge and services utilization among adolescents from rural areas of Rwamagana District. Table below shows the number of adolescents that selected in each sector. Proportion to sample was used to estimate the respondents from each sector Table 1.

A total of 392 eligible adolescents were recruited using simple random sampling. All adolescent from the selected sectors had equal chance to be selected. A household with an adolescent aged 15-19 will be used as a sample frame, in case that a household had two or more adolescents, one was selected randomly. Eligibility criteria include: (1) residence of selected sector for at least one year, (2) being in selected sector during data collection period (3) received a consent form from parents or caretaker (4) able to communicate with researcher. All respondents who do not meet the above mentioned criteria were excluded in the study.

Data was corrected by using a questionnaire. Pre-tested structured questionnaires were prepared by reviewing previous studies on the problem of interest 3, 7. The questionnaire explores the demographic, social and economic characteristics; knowledge of RH-related topics (fertility, contraception, STIs/HIV/AIDS, HIV counseling and testing (HCT)) and patterns of RH services utilization.

Data was collected by researcher and trained research assistants. Research assistants were recruited and trained on the study objective, questionnaire content and how to ensure privacy and confidentiality. The collected data was checked for incompleteness and inconsistency and cleaned by researcher. One research assistant collects data in two sectors. In household with more than one adolescent aged 15-19 years, only one selected as potential respondents. All questionnaires and entered data will be kept secure by the researcher. Access is restricted. Name and addresses of participants were not required in the study.

Data was checked for completeness, cleaned, coded and entered into excel sheet, and then exported to SPSS version 22.0 for further analysis. Frequencies and percentage were used to summarize descriptive statistics. Percentages were used to assess the level of RH knowledge and services utilization among rural adolescents. A total of 19 questions were used to assess knowledge of adolescents about reproductive health services. The right answer was scored 1 and wrong answer was scored 0, total scores were 19. The respondents were classified as good knowledge with scores >10 equivalent to 53% and lower knowledge with scores of 9 and less. Data were presented using tables and graphs accordingly. To determine the association between different factors associated with reproductive health knowledge and services utilization, a logistic regression model was employed. First, each variable was entered into a binary logistic regression model. Second, variables which showed significant at p-value of 0.05 fitted into multiple logistic regression model to assess the relationship between reproductive health knowledge and services utilization. Variables that remained significant at p-value of 0.05 in the final multivariate logistic regression model were identified as independent factors associated with reproductive health knowledge and services utilization among adolescents in rural areas of Rwamagana District.

Table 3. Reproductive health knowledge among the adolescents in rural area of Rwamagana District

Regarding the symptoms of STIs, only 34.9% knew that pain during urination can be STI symptoms, the majority 80.6% knew that pain during sexual intercourse is STI sign. For HIV transmission route, the majority 94.6% knew that HIV can be transmitted during unprotected sex, 82.9% knew that HIV can be transmitted through the sharing sharps. Adolescents were aware about HIV prevention measures where 386(98.5%) agreed that sexual abstinence during adolescents should prevent adolescent to get HIV, all of respondents knew that consistent and proper use of condom can prevent HIV.

The findings presented in figure 1 shows that the majority of adolescents 91.8% had good knowledge about reproductive health. 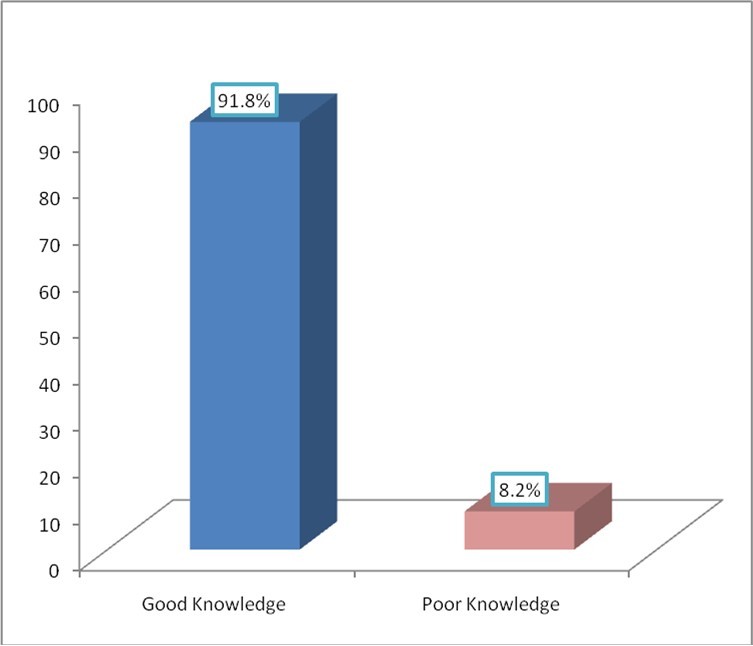 The findings presented in table 4 indicated that the majority of adolescents 262(66.8%) had ever utilized reproductive health services at health facility. A total of 217(55.5%) had visited reproductive health center in the last 6 months, of those who visited the center 131(60.4%) were tested for HIV and given counseling, 151(55.5%) received STI diagnosis while very few adolescents 8(2.0%) visited RHS to seek for HIV treatment.

The study found that more than a half of respondents 54.1% were not aware that reproductive health services are offered at health center. A total of 64.8% knew that a girl could become pregnancy after puberty, 73.5% knew that a male could get a girl pregnant during puberty. Adolescents in this study were knowledgeable about the signs of maturity for both girls and boys where 86.5% knew that breast development for a girl is a sign of maturity, 76.8% knew that appearance of public hair for both girls and boys is a sign of maturity, and appearance of menstruation for a girl is a sign of maturity. These findings are consistent with a study conducted in Ethiopia where 53.5% of the adolescents who participated in the study responded that a girl could get pregnant the first time she had sex and the age at which it could occur was mentioned as during puberty. The same study reported that the male counterpart could be mature of physically made a girt pregnant during puberty 3.

In bivariate analysis religion, occupation education level, age of mother and living status were associated with use of reproductive health services (P<0.005). This finding are consistent with that conducted in Ethiopia where in bivariate analysis, the factor found to be significantly associated with reproductive health service utilization were education level and living status. In contrast, the same study found that adolescents age, marital status ; mothers’ educational status; poor family communication habit on SRH issues; family monthly income; history of sexual intercourse; poor discussion on SRH matters with sexual partner, pears, and health workers; perception of risk towards HIV/AIDS were associated with reproductive health services utilization 13. The inconsistence may be due to that Ethiopian study was conducted only among female aged 15-24 while this study was conducted among both male and female aged 15-19 years old.